Bahia Shehab is a multidisciplinary artist, designer and historian concerned with identity and preserving cultural heritage. Through investigating Islamic art history, she reinterprets contemporary Arab politics, feminist discourse and social issues. She was active as a street artist during the Egyptian uprising in 2011 and recently founded TypeLab, a centennial Lab at the American University in Cairo concerned with the dissemination and development of the Arabic script. She is Professor of design and founder of the graphic design program at The American University in Cairo where she developed a full design curriculum focused on the poorly documented visual culture of the Arab world, her co-authored book A History of Arab Graphic Design is the first-ever book-length history textbook on the topic. 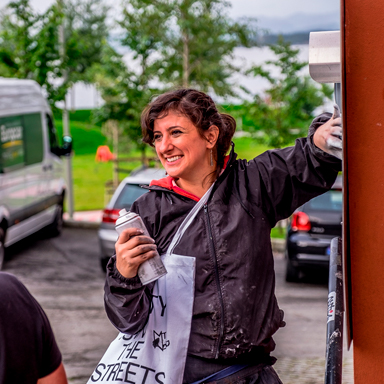 Writing on the Wall: Bahia Shehab

Historian. Street artist. Professor of graphic design. Bahia Shehab lives the future she believes in for her students: multi-disciplinarity. “I think if I were only a historian or only an artist or only an academic, I wouldn’t have survived,” says the Lebanese-Egyptian finalist for the Tällberg Eliasson Global Leadership Prize, who lives and teaches in Cairo.

It was as an artist that Shehab gained prominence, during the Arab Spring. Her 2010 installation, A Thousand Times NO, which featured historical images of the word “no” in Arabic script, became the basis for a series of messages she spray-painted in the streets, starting in Tahrir Square: “No to military rule.” “No to a new pharaoh.” “No to violence.” She has since moved her street art beyond Cairo—in London, her tags were “No to Brexit” and “No to Boris”—and carefully documents what she has done. “I’m trying to use the Arabic script as a medium of communication,” she explains, “to open up to bigger and more important topics.”

Shehab aligns herself with institutions and curators who look at the world the way she does, “who care about changing perception, building bridges, connecting communities, educating, and not just selling works of art,” as she describes it. And she is trying to build structures that sustain the ideas she believes in, including most recently Typelab, an initiative to develop and innovate Arabic type design.

Despite recognitions and awards that include the BBC’s 100 Women list, a TED Senior fellowship, and a Prince Claus Award (she was also the first Arab woman to receive the UNESCO-Sharjah Prize for Arab Culture, in 2016), she sees her teaching work as an important circle of influence. The program she founded at the American University in Cairo offers a full design curriculum, mainly focused on the visual culture of the Arab world, and her students are proving to be “seeds of change.”

Shehab knows her ambitions as a leader are not small. First, she wants her work to gain more rights for women in her part of the world. Asked where her wildest dream would take her, she says, “I will shock you. I would like to create a unified Arabic economy. I don’t think I will live to see that, but if we can leave the seeds for a unified Arab world that has something to say … that are not only post-colonial consumers, that are contributors to the culture of the world, to its prosperity, to its flourishing, To me, this is my ultimate dream, that I can create enough networks and understanding and empathy between people in the different Arab worlds.”

Learn more about Bahia Shehab’s on the American University of Cairo’s website at https://www.aucegypt.edu/fac/bahiashehab