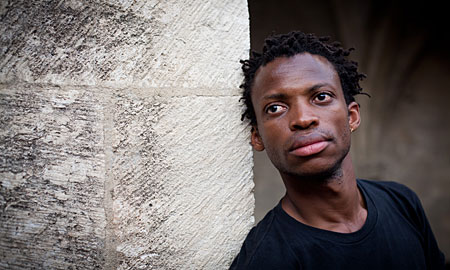 “Why did you come back here? You’ve managed to get out of this fire, stay outside.” This was his family’s reaction when choreographer Faustin Linyekula returned to his homeland, the Democratic Republic of Congo, in 2001 to found a transformative dance company, Studios Kabako, in the nation’s third largest city, Kisangani.

Linyekula, who is one of the finalists for this year’s Tällberg/Eliasson Global Leadership Prize, had left the DRC to study in Kenya, after the Congolese regime closed its universities. His country was—and continues to be—gripped by violence, corruption, and chaos, its people struggling daily for survival. But Linyekula could imagine an alternative, and went back to give other Congolese the tools to do so. “Even though, yeah, we live in a pile of ruins, it’s still possible to dream,” he says.

Studios Kabako is a hybrid in many ways, blending movement with the spoken word, dance with community action, and hope with pragmatism. (One recent project: a water-treatment facility.) Even as Linyekula’s international reputation has soared through performances abroad, his focus is at home, telling “the stories of the Congo … to the people who are there.” He wants to create “the space of imagination in the middle of ruins, in the middle of chaos, because I’m convinced we need art in the most fragile parts of our cities and the most fragile parts of the world, in the parts that are experiencing the most pain.”

Studios Kabako’s latest program, “Grow from me a forest,” grew out of Linyekula’s discussions with biology teachers at the University of Kisangani. “The forest, even in the Congo, is disappearing,” he says, “and people would say, No, forest is endless.” The question became how to get people to experience the forest, and its loss. Children were given crayons and paper and asked, “When I say forest, what do you hear? What do you see? What comes to mind?,” and their responses were captured with sound recorders and cameras.

Using science, folklore, art, and visits to the forest, Linyekula created a storytelling workshop, asking “How do we translate this knowledge into something that can be shared?” He doesn’t want simply to tell people; he wants them to feel it, “because it’s only when the knowledge goes through the body, through experience, that movement becomes possible.”

Dictatorship negates the individual, he points out, robbing them of a sense of responsibility for their own lives. The ultimate goal of Studios Kabako is to restore that feeling, even in modest ways, whether in a performance, or by planting trees, or by producing clean water for 1,000 people. “Bringing people together who can share the same space in the same time and look in one direction … can be very transformative,” he says. No wonder Linyekula has made a few Congolese politicians nervous: he understands that if people can imagine change, then they can begin to make it happen.