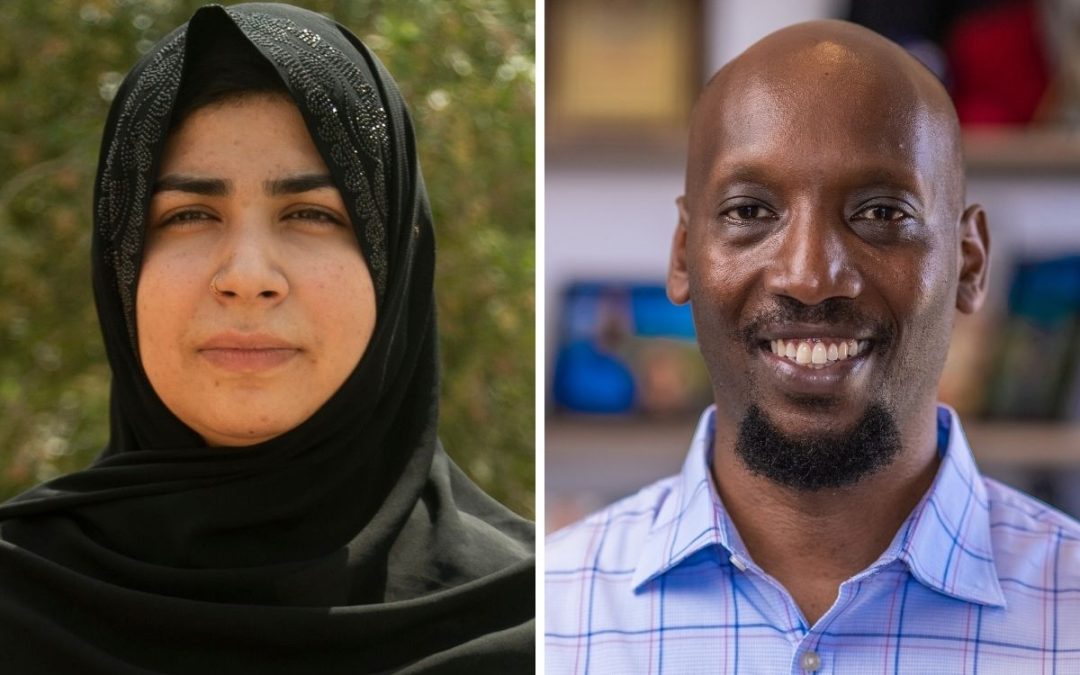 In 2021, the Foundation announced two winners in the newly established category of emerging leaders. Pashtana Durrani, for her efforts to promote childhood digital literacy as a pillar of a new approach to education in the face of the brutal and violent political and social developments in Afghanistan and Christian Ntizimira, for his passionate advocacy for palliative care in Rwanda and elsewhere in Africa, based on his deeply held belief that dignified end-of-life care is a human right.

Navigating between tradition and modernity, 23-year-old Pasthana Durrani is relentless when it comes to education access for women in Afghanistan. She founded her nonprofit, LEARN Afghanistan, to enable girls in areas that lack the infrastructure to continue learning. “We came up with a solution that worked for Afghanistan, an offline app for tablets, which doesn’t need a lot of electricity.” LEARN began with five digital tablets; today, 7,000 girls are using this innovative solution. Pashtana finds constant inspiration in the students’ drive, “You need to make sure that you take the leap so someday they take their lead.” She knows they will become responsible citizens and lead their communities to a better future.

When Pashtana was a child, her father opened a school at home because UNICEF would not build one near her refugee camp in Pakistan. Her mother and her aunt soon began teaching, too. “I was around three or four years old, and that’s where my work ethic comes from.” This improvised school was a success, and up to 70 girls studied English and Pashtun with Pashtana’s father. Students even came knocking at their door during summer or winter breaks asking if the school was open.

Pashtana is proud to have been motivated “by all these women leaders of Afghanistan that nobody talks about.” She mentions heroines like Malalai of Maiwand and Ayesha Durrani as relatable sources of inspiration. “Their names, their family, their lineage, everything was like mine.” One of her projects is even named after Queen Soraya, the first female education minister in Afghanistan.

Despite days when things do not go her way, Pashtana has learned one thing: not to quit. “I keep going,” says Pashtana, because she knows that every girl in school contributes to a more open and educated Afghanistan. Her determination has enabled her to create LEARN Afghanistan.

“LEARN focuses on all the aspects to make sure that if a girl is not going to school, she does; and if she does, make sure she stays.”

For example, after realizing girls were missing school because of their period—many rural schools don’t have access to sanitary pads, running water, or clean washrooms—

LEARN created a menstrual hygiene management program to ensure their attendance. Furthermore, LEARN is committed to sending doctors every two weeks to the villages if families keep their daughters in school. “It’s a win-win situation.”

Pashtana recalls how Stones into Schools by Greg Mortenson helped her realize she is not the only one struggling to improve education access for girls. In the book, Mortenson—finding himself without a blackboard or chalk—teaches numbers to a girl by writing them in mud.

When LEARN opened their first school and went to see the principal; she was worried they didn’t have an English teacher. He then tells her that a seven-year-old—that has never attended an English lesson—has learned the Lion King story by heart, in English, by using the tablet. “And that’s when I understood that that was my mud moment,” says Pashtana.

“I want to focus on refugee camps in Jordan, Syria, Yemen, Bangladesh,Turkey and Pakistan, and on communities that welcome digital learning or are in dire need,” says Pashtana when asked about her future plans. She believes digital learning, the use of tablets, is more efficient than slow, costly infrastructure projects.

Whether it’s a tribal leader, a young female student, or an international agency, Pashtana strives for a kind of leadership where “it’s not just me telling them stuff—it’s me listening to them.”

His name is Christian Ntizimira, and he is a Rwandan palliative and end-of-life caregiver seeking to change how Rwandan patients and families experience death and dying. “Palliative care is about giving voice to the voiceless.” Ntizimira, the founder of the African Center for Research on End-of-Life Care, firmly believes that “taking care of patients or family facing life-limiting illnesses is not about medical decisions.” He is currently spreading the idea among his colleagues that social, psychological, and spiritual factors are as important as physiological ones during caregiving. For Ntizimira, the concept of palliative care, in the context of the Rwandan genocide, can contribute to a sense of humanity lost during those devastating 100 days.

“My dream when I was young was to be the best surgeon.” Christian grew up as a refugee in the Democratic Republic of Congo, and when his family moved back to Rwanda after the civil war, he decided to help rebuild his country. So, he visited a hospital in Gisenyi. There he saw many wounded and thought the best way to help was to become a surgeon.

After finishing medical school, while working in a surgery department, he met a patient dying of liver cancer. “It was the first time in my career as a surgeon that I saw someone in really that much pain; I can’t even describe it.” The patient’s mother came to Dr. Ntizimira and knelt before him, asking him to do something for his son. “I felt it twice,” says Ntizimira.

First, he felt it as a doctor. Medical education does not encourage prescribing morphine to the patient. “For physicians, pain is not a priority.” Then, he felt it as a Rwandan. “In our culture, when an elder kneels before a young person, it means you failed.”

He went home that night and, after questioning himself, he shifted his dream from surgery to palliative care. When describing palliative care, Ntizimira says, “It’s not only about withdrawing or withholding medication. It’s about dignity. It’s about compassion, empathy, and bonding.”

What he realized from meeting that desperate mother is that medical care lacks a sense of humanity. “I said, no more suffering of this kind, especially in a country like Rwanda.” He then narrowed his efforts to two questions: “How do African patients die?” and “How would African patients wish to die?”

When asked how he led palliative care in Rwanda, Ntizimira responds: “I don’t have followers. Actually, I’m following the patients. Patients are the leaders.”

However, Ntizimira is actively inviting palliative care specialists to learn from how things are changing in Rwanda. He has observed that the intersection between patient autonomy and community responsibility, the decision-making involved, which is crucial in Rwanda, is foreign to Western colleagues. He refers to Ubuntu, which is sometimes translated as “I am because we are” or “humanity towards others.” He means that palliative care should center around the family and not just the individual.

Moreover, Western techniques and philosophies seem hard to grasp to Rwandan families which have as many as 40 or 50 members. That’s why Ntizimira is “writing a book on communication in Rwanda.” So, he has taken local fauna as metaphors for 12 kinds of suffering in family members. For example, “giraffe” family members living abroad when returning upon hearing a loved one is dying, come back to Rwanda with very high expectations.

Once, Ntizimira tended to a woman dying of ovarian cancer in very dire conditions. He wrote down a heart-felt text expressing his frustration with the patient’s situation. The text ends courageously:  “I’m not ashamed because we are not beholden to the guilt, fear, death or stigma, but to a life of dignity and Ubuntu. I’m not ashamed because I cannot do everything but must do something. So, this is my future.”