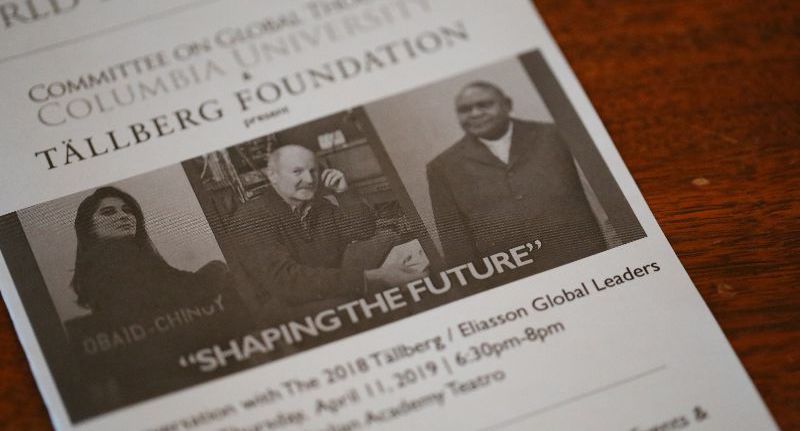 On April 11, Columbia University’s Committee on Global Thought hosted the 2018 winners of the Tällberg / Eliasson Global Leadership Prize in a public conversation about global leadership in the 21st century.

Neuroscientist Rafael Yuste, filmmaker Sharmeen Obaid-Chinoy and Pastor Nicolas Guérékoyame-Gbangou discussed their leadership accomplishments and challenges with an audience drawn from the Columbia community and friends of the Tällberg Foundation. 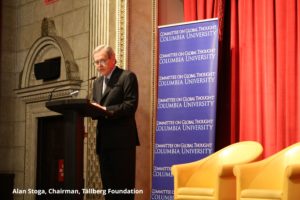 The evening conversation demonstrated that global leaders aren’t born out of specific places, under a fixed set of rules, dealing with just one particular set of issues. Quite the contrary; they’re shaped by and in reaction to the events, chaos and harshness of “a disrupted world where yesterday is no longer the best predictor of tomorrow,” according to Tällberg Foundation Chairman Alan Stoga. “We need leaders who are innovative, dynamic, optimistic, rooted in universal values and global in outlook,” which is how he described the 2018 Prize winners visiting Columbia. 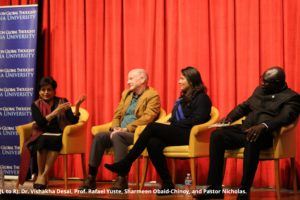 “Change has to come from a grassroots level” said documentary filmmaker and two-time Academy Award winner, Sharmeen Obaid-Chinoy. Obaid-Chinoy’s foray into documentary filmmaking was incited by her passion to challenge the status quo, and her unwillingness to accept rules made by people–”usually men”–who were far away from difficult, unfair social realities. She said she set out to tell stories, not to change laws, but learned that her films could be powerful tools. “When I began to make films, I thought about them not just as cinema, but a vehicle for bringing about social change” said Obaid-Chinoy. 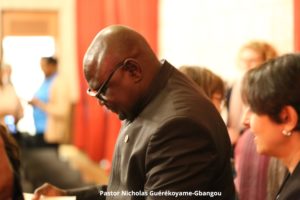 To this end, there was one consensus among the global leaders: they all believed that the key to being a successful leader is to be unwaveringly passionate about the cause. Pastor Nicholas, who has dedicated his life to fighting social injustices and is committed to restoring peace in the Central African Republic, stated that “our passion needs to have goals”, adding “passion for our work can help us achieve great success, but an uncontrolled passion could easily lead us in the wrong direction.”

As Desai pointed out, great leaders succeed, but they also fail, and all three Prize winners acknowledged that their careers have been shaped by failure. An exemplary anecdote came from Professor Yuste, a leading neuroscientist at Columbia whose work now focuses on the ethical implications of the intersection of Artificial Intelligence and neuroscience, described how he had been stripped of his research funding when grant makers (and other leading scientists) decided his concept of the brain as a neural network was simply wrong. Instead of giving up, he found new collaborators who persevered in developing the concept. 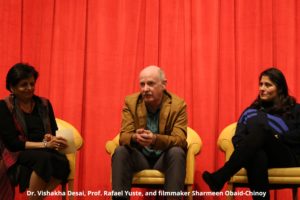 In Prof. Yuste’s words: “during a conference in England to brainstorm the future of neuroscience, I presented the idea of measuring the activity of every neuron in the brain. I was crucified! My colleagues said it was impossible.” Notwithstanding the research and funding needed, the idea was simply too far-fetched for many. “But there were a few members of our scientific community and other fields present that day who believed in the idea, and that was enough for me to get energised about the project.” The eventual result of his defiant passion was the global BRAIN (Brain Research through Advancing Innovative Neurotechnologies) Initiative that is working to revolutionise understanding of the human brain.

The 2018 Tällberg / Eliasson global leaders talking about the relationship between leadership and passion.

The Tällberg Foundation’s collaboration with Columbia’s Committee on Global Thought is part of an ongoing effort to develop a global network with leading academic partners and others to encourage more global thinking about leadership. In addition to Columbia, the Foundation has engaged the School of Global Affairs and Public Policy at the American University of Cairo and the Instituto Tecnologico Autonomo de Mexico, and is actively seeking additional partners. “We want partners who are dedicated to encouraging new kinds of leadership for the new challenges that confront societies,” concluded Stoga.