Thinking about a (not so) Brave (but definitely) New World 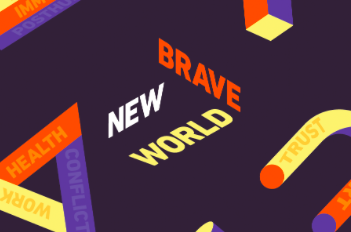 We live in a rapidly changing world. As Chinese President Xi observed late last year, “The changes we are encountering are unseen in a century…Mankind has reached a crossroads…and the future hangs on the choices we make.”

The changes are political, economic, social, environmental and technological; they are fundamental disrupters of how we are living and how we have organized ourselves. If we chose badly or if we pretend that we do not have to make profound choices, then our societies—industrialized, emerging and those that are neither—are likely to be overwhelmed by the challenges that confront us.

The past 70 years have been a developmental miracle: most people in most places are better off in almost every way. Despite speed bumps along the way, we have lived unprecedented decades of peace and prosperity. That golden era was premised on a post war—and, then, a post Cold War—global order built and sustained by the United States. That era is almost over, partly because American willingness and capacity to lead are fading, but more importantly because the benefits of that global order are fading even faster, even if we pretend otherwise.

Too many people in too many places are being squeezed by slow and unfairly distributed economic growth; many of them rightly fear that rapid technological change will worsen both trends. Too many people, in rich countries and in poor ones, think their politicians are not delivering on the basic social contract between those who govern and those who are governed. People around the world tell pollsters they think their governments don’t understand the realities in which they live, and that politicians make policy more for themselves than for the people they are supposed to represent. Corruption, intellectual as well as the old fashioned kind, further corrodes the institutions that delivered the Great Prosperity.

This crisis of governance has morphed into a crisis of confidence: a massive global poll published earlier this year by the U.S.-based Edelman public relations company, discovered that only 1 in 5 people globally believe that the “system,” broadly defined, works for their interests. Twice as many say the system is failing them.

Sooner or later, that is the stuff that makes revolutions.

The symptoms of that rolling failure are all around us. Political competition in most democracies has become a fight for the extremes. Visions of growing economic inequality are broadcast everywhere by social media, feeding discontent among the have nots and fear among the haves. Growing populism and nationalism, driven by the politics of extremism and a global loss of economic dynamism, erode the post war institutional framework that assumed countries would gradually become more alike, at least in their political philosophies. Instead, growing differences get in the way of addressing problems that can only be managed at regional or global levels, ranging from climate to human trafficking to assuring ethics guide choices about how new technologies are implemented.

Indeed, on top of everything else, rapidly accelerating technological change is reshuffling the basic dynamics about how the world works. New technologies are transforming how we live, communicate, learn, work, and think. This is much more than the latest smart phone or electrical car or new robots changing how things are made; rather, it is genetically altered babies, brain to computer interfacing, self replicating algorithms and endless other innovations that used to live only in the pages of science fiction. Again, this is not only a U.S. and Europe story or even an industrialized country story; technology ignores borders—and today’s technological innovations are unusually mobile and accessible, for better and for worse.

To be trite: emerging disruptive technology can save us and kill us, and will probably do both.

Real time climate change adds to the witches’ brew. Unusually intense storms, seemingly endless droughts, melting glaciers, rising seas, increasing heat and humidity, shifting wind and sea patterns are challenging many countries’ infrastructure and their capacity to protect their citizens. Mozambique’s disastrous cyclone Idai is only the most recent poster child for the killing capacity of climate-enhanced weather. Among other knock-on consequences will be growing legions of climate refugees, estimated by the World Bank to exceed 140 million by 2050–a march that has already begun.

As President Xi implied, these are existential challenges. If we try to ignore them, they will metastasize, not disappear. If we rely on the pendulum swinging back to less complicated times, we condemn ourselves to sometimes catastrophic surprises. If we think they are someone else’s problems, we are doomed to sleepwalk into a failed future.

But it would be equally wrong to give in to despair or to wallow in dystopia. Systems can be reimagined; civics relearned; technology controlled; economics reframed; global relationships renegotiated.

Achieving that requires better leaders than most countries, companies and organizations have today. It demands leadership that is innovative, dynamic, optimistic, based on universal values and global in perspective. It needs leaders who recognize that yesterday is no longer the best predictor of tomorrow, and who are courageous enough to experiment rather than rely on the dubious comfort of fragile, perhaps failing status quo.

Where will we find them? Nowhere, if we don’t start looking!

Alan Stoga is chairman of the Tällberg Foundation of Sweden and the United States that annually awards the Tällberg / Eliasson Global Leadership Prize to great leaders who operate anywhere. You can nominate a leader at www.tallberg-snf-eliasson-prize.org