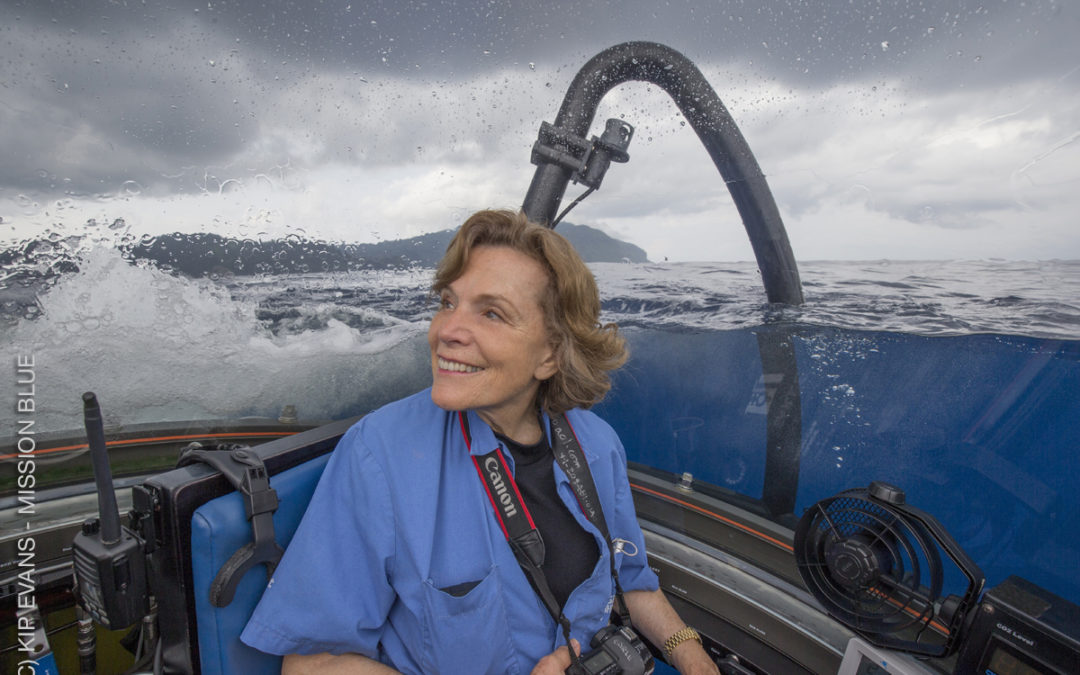 The world’s foremost oceanographer—the Jacques Cousteau of our era, dubbed “Her Deepness”—she is on the road most of the year, and has logged countless hours underwater since her first dive, in a Florida river, when she was 16. But where Cousteau introduced audiences to the wonders of the deep, Earle is more often warning of their disappearance. The oceans are dying, as she tells anyone who will listen, from pollution, overfishing, and climate change.

But she is not without hope. “I’ve been a witness of the greatest time of loss” she says—referring to the removal of 90 percent of the big fish from the ocean and the loss of half its coral. “At the same time, we have learned more than at any time in history. “ A National Geographic Explorer in Residence since 1998, Earle herself has been studying marine life for more than five decades, and was the first woman to serve as chief scientist at the National Oceanic and Atmospheric Administration, among other pioneering achievements.

Ten years ago, she founded Mission Blue, which is doggedly establishing “Hope Spots”—marine protected areas—in the oceans, with the goal of protecting 30 percent of the ocean by 2030. To date, there are 130 such areas, with more on the way, each backed by a community of what she calls “champions,” who have made a commitment to take care of them. “We need eyes in the ocean,” she says. With her daughter, she continues to develop new technologies that can provide enhanced access to the sea. ”We certainly need scientists to go deep,” she says,” but I really want to get teachers. I want to get the kids. I want CEOs, I want the leaders of countries to go see what’s in their blue backyard.”

The hope is to change the way people think about the ocean—to make them truly aware of what is being threatened. As she once described the consumption of cod, halibut, swordfish, and other large marine predators: “Eating these fish is like eating the last Bengal tigers.” Despite her record-breaking underwater adventures, she is somewhat wistful about the limited time any diver can spend in a deep-sea environment. “Jane Goodall had 15 years … looking at one species that she got to know so well that she transformed the way people think about [it],” she points out.

Earle realizes, however, that the time she spends on terra firma, trying to communicate her love for and knowledge of the seas, is valuable too. When National Geographic first asked her to write about living underwater, in 1970, she was reluctant, fearful of being viewed as a popularizer—until she came across an essay by Thomas Huxley: “He said that as a scientist you have a responsibility.”

It’s a responsibility that she feels ever more keenly. “It always comes back to really understanding what we are doing,” she says, as a video-interview with Tallberg is winding down, “and then having the will to move in a direction that will take us to a better place.” In the background, outside Earle’s home, a rooster crows. Like the renowned oceanographer, it is sounding a wake-up call.