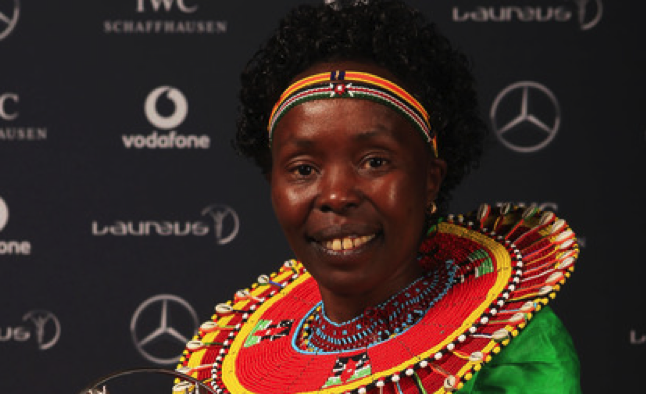 First came Tegla Loroupe’s extraordinary achievements as an athlete: first African woman to win the New York Marathon, in 1994 (she would win twice more); world-record holder at 25 and 30 kilometer distances; three-time Olympian, and more. Then came the Kenyan runner’s emergence as a champion for something greater. Through the Tegla Loroupe World Peace Foundation, which she created in 2003, she organizes races to promote peace and economic empowerment, as well as running a school for orphans. In 2016, Loroupe led the first-ever refugee team to the Rio Olympics, including five athletes she trained at a camp outside Nairobi.

A finalist for this year’s Tällberg/Eliasson Global Leadership Prize, Loroupe had no role model of her own when she was growing up in conflict-ridden West Potok County, Kenya, near the border with Uganda. One of twenty-four siblings, small, skinny, and female, she was considered worthless by her father. From her birth in 1973, her lot in life seemed fixed: she would herd cattle, haul firewood, do housework, marry, and have children. No wonder that, when she’s asked what drives her, Loroupe says, “In the beginning, it was my desire to see change, especially for women.”

At first, for young Tegla, running—ten kilometers, barefoot, and in a long dress—was simply a way to get to school on time, and avoid the beating given to latecomers. She didn’t own a pair of running shoes till she was in her teens. Even after her unusual speed was noticed by teachers, it was a struggle to overcome her father’s disapproval, her frail appearance, and the prejudice against the Potok people. “I was at one time called the daughter of a criminal,” she recalls of her meeting with Kenya’s sports federation. “They said she comes from a bad community.”

Loroupe confronted a similar stigma when she started training the refugees—they also are marginalized, she says. “But I was lucky because my government gave me the trust, UNHCR gave the support, and the sponsors [were] Thomas Bach and the IOC.” The IOC has asked her to head another refugee team in 2020, and her athletes, she hopes, will go on to inspire other young people who have been displaced.

Over the past two decades, Loroupe has managed to win over an impressive number of nay-sayers. She has used her athletic stardom to broker peace between warring factions in Kenya, from tribal disputes in her native region to the national level. “I was running between the opposition and the government,” she says, recalling her work with former U.N. Secretary General Kofi Annan in the violent aftermath of the 2007 elections.

“Of course to the opposition, I’m their sister, and from the government I am their sister. It cost me a lot of—I was not able to qualify for the Olympics in Bejing— but for me I was okay, I did something again for the country. Having a medal is another thing but saving lives of people for Kenya is bigger and as unique as going to the Olympics.”